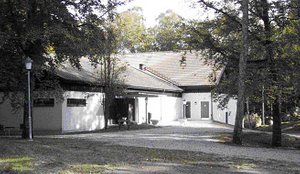 70 SEK per visitor. Free for children under 15.

A membership in Bjärnum´s Archaeological Association is 150 SEK per person or 250 SEK per family, and allows admission to all parts of the museum whole year round. An admission fee can however for special arrangements be necessary even for members.

It is possible to buy coffee and biscuits. If requested, lunch can be arranged at the Tre Hammare restaurant.

A village in Göinge, a district where nature is still unspoiled, and you can feel a breath from the past.

The museum is beautifully situated in a luscious beech wood just a walking distance from the lovely bathing spot – Bjärlången.

More than 100 000 various objects describe how our forefathers lived.

A long time ago a farmer ploughed up a flint dagger…

That’s how it all began. The farmer’s son, whose name was Atto Peto become one of our greatest collectors and local patrons. He paved the way for the creation which his children, Karin and Åke, later developed, collected, wrote down, and catalogued.

Beside the church lay the little village school, a cultural centre which had done its duty. Around the middle of last century it became a museum and got a place of honour in a beech wood near the lake. Now it’s not alone there any more. There is a modern museum built in 1975 well adopted to its purpose, and in 2005 a large extension to the museum was officially opened. Near the museum you can see a log-cabin from the 18th century, a  dug out earth floored cottage, a mill, malt drier, carpenters workshop, and Agricultural museums. The objects in the museum cover a period of about 11 000 years.